WATCH: Despite the warnings from government leaders and health officials, it seems many Canadians chose to ignore the advice and had some contact with people outside their households over the holidays.

Canadians knew the recent holiday season was going to be a tough one amid spiking coronavirus cases.

New Ipsos polling done exclusively for Global News shows while 52 per cent of Canadians surveyed last week reported no in-person gatherings outside of their household over the holidays, 48 per cent admitted to doing so, with nearly all insisting their actions had no impact on the spread of the virus.

“If Santa was giving people naughty or nice ratings, there is about half of us that were prepared to be naughty,” said Darrell Bricker, CEO of Ipsos Public Affairs.

“It really does underscore the fact that people are getting quite frustrated being locked down.”

Just six per cent said they met with multiple other households. 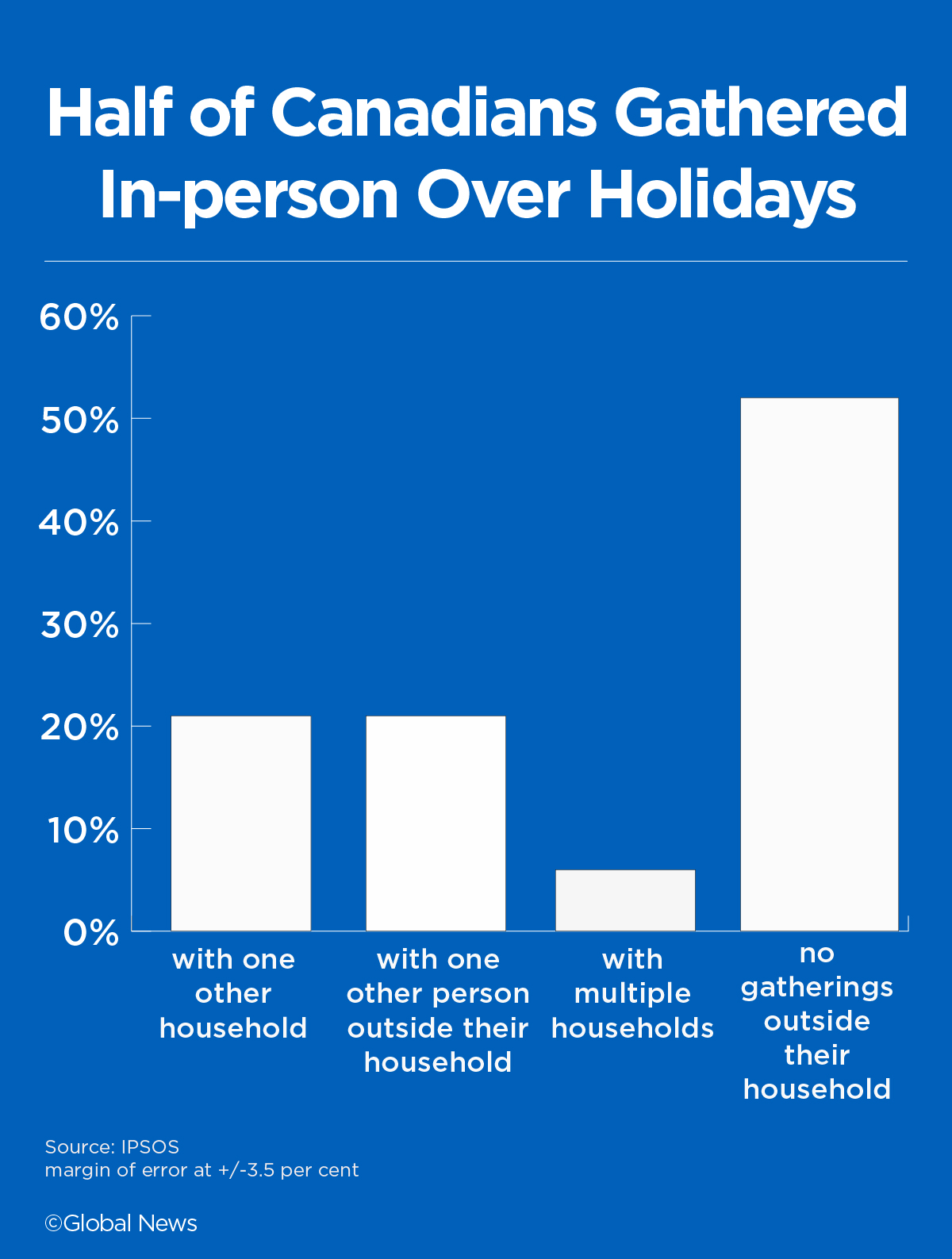 While public health officials did say people who live alone could gather with one other household over the holidays to avoid negative mental health, most regions have largely moved away from the “bubble” approach of authorizing in-person gatherings between households where people do not live alone.

That comes as exploding coronavirus cases strain public health systems across the country and provinces grapple with some of the highest infection numbers seen yet during the pandemic.

Many are now weighing what further measures could be implemented to reduce the spread, with Quebec rolling out a mandatory curfew for its residents while Ontario rejects that approach and maintains a partial one-month lockdown on the most populous regions of the province.

Bricker said while the polling suggests most Canadians heeded warnings not to travel abroad or out of province, the willingness of many to hold gatherings within their communities demonstrates the challenges public health officials are facing in getting the spread under control.

Read more:
The Canadian politicians who travelled over the holidays during a coronavirus pandemic

Canada has confirmed roughly 665,000 cases of the highly contagious virus so far, with 17,030 deaths.

While federal and provincial officials urged Canadians not to gather in-person over the holidays, many MPs and provincial representatives ignored that advice with trips to Hawaii, Florida and Europe.

A spokesperson for Prime Minister Justin Trudeau said he stayed at home over the holidays.

Employment Minister Carla Qualtrough’s office also said on Monday that she will introduce legislation once Parliament returns at the end of the month to bar Canadians who choose to travel from accessing sick leave benefits once they are forced into mandatory quarantine upon their return.

Bricker said he plans to watch how officials communicate around March break in the coming months, given travel last year over the period has been credited with jumpstarting the spread of the virus within Canada.

He said the poll also suggests voluntary measures are not working and that any stricter measures to enforce the need for physical distance and limiting contacts need to carry teeth.

“Compliance with the voluntary directions wasn’t that good going through the Christmas holidays,” he said.

“Unless there’s significant enforcement, the likelihood that people are going to break them is pretty high.”

Exclusive Global News Ipsos polls are protected by copyright. The information and/or data may only be rebroadcast or republished with full and proper credit and attribution to “Global News Ipsos.” This poll was conducted between January 5 and 6, 2021, with a sample of 1,000 Canadians aged 18+ from Ipsos’ online panel. The precision of Ipsos online polls is measured using a credibility interval. This poll is accurate to within ± 3.5 percentage points, 19 times out of 20, had all Canadians aged 18+ been polled.