Amanda Connolly GlobalNews.ca
July 1, 2022  6:00 am
WATCH ABOVE: In-person Canada Day celebrations returned to Ottawa on Friday after a two-year absence due to COVID-19. Tensions remain high amid a significant police presence, as thousands gathered in the streets of downtown Ottawa. “We just thought we’d take everything in stride,” said Rosemary Fife when asked if she was worried about protests.

Celebrations were held Friday for Canada Day in the nation’s capital after two years that saw Canadians marking the country’s birthday at home, or virtually due to the COVID-19 pandemic.

Tensions were high amid a significant police presence as thousands gathered in the streets of downtown Ottawa where residents continue to grapple with what police have acknowledged is “lingering trauma” from the convoy blockade earlier this year.

As it happened: Canada Day celebrations, protests held across the country

In normal years, Canada Day festivities draw thousands to the lawns and streets around Parliament Hill for concerts, fireworks and parties. COVID-19 forced celebrations to be held virtually in 2020 and 2021.

Instead, official celebrations took place at LeBreton Flats, the festival grounds roughly a 20-minute walk west of Parliament Hill, as the parliamentary precinct battens down.

People were still encouraged to come to the Hill, even though the majority of events were elsewhere. However, there were long lineups to get in, with security screenings.

Notably absent around the Canada Day stage, however, were any vocal protesters. Even as Prime Minister Justin Trudeau shook hands with the crowd, he was mostly met with cheers, rather than the vocal frustrations protesters in Ottawa have expressed in recent months.

Several hundred protesters did march through the streets south of Parliament Hill on Friday afternoon, with a heavy police presence along the route as they walked and chanted “freedom.” 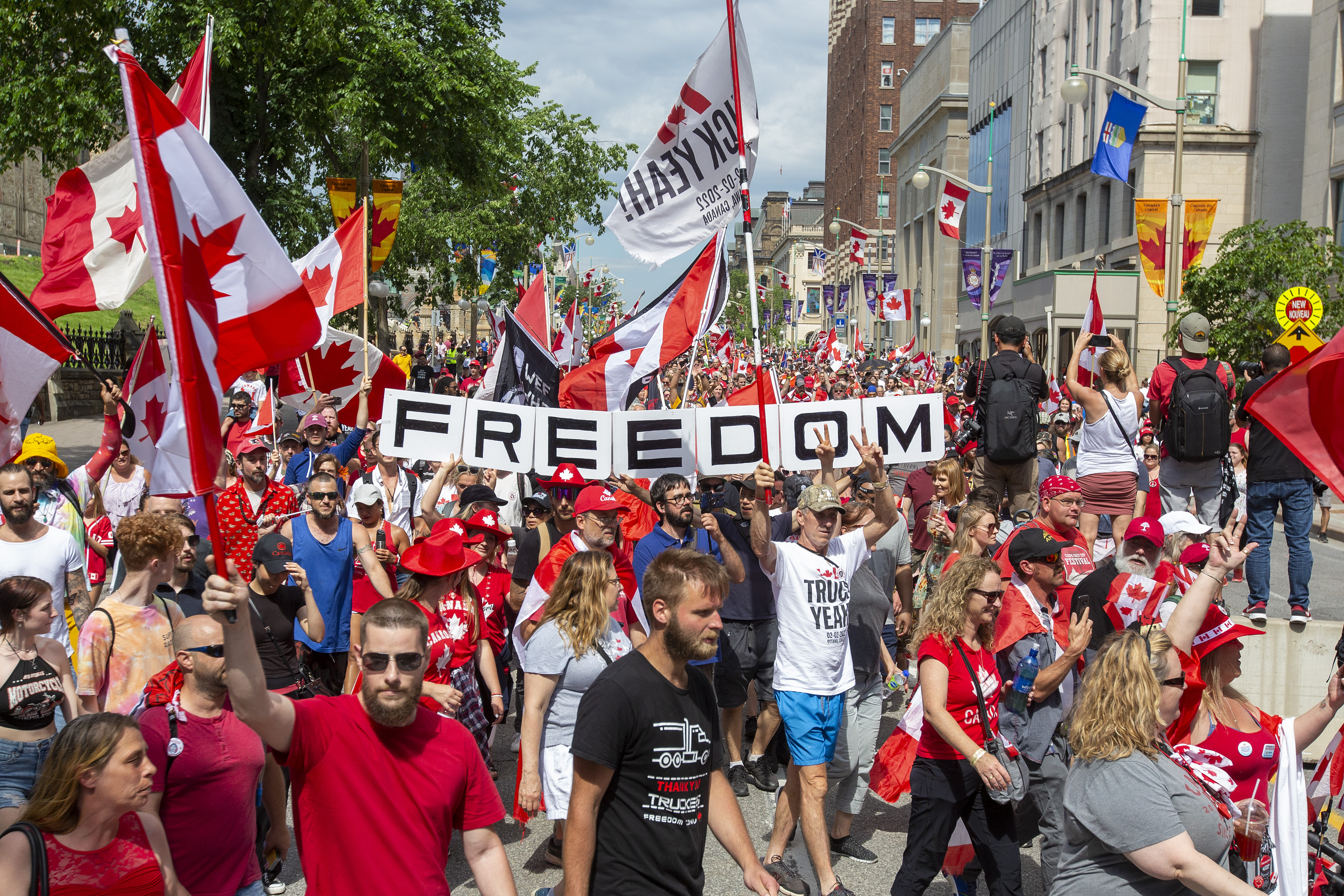 Crowds overall appear to have been smaller than in pre-pandemic years, where Canada Day events routinely drew crowds in the tens of thousands, with roughly 56,000 people at the 150th anniversary.

An event official on the ground at LeBreton Flats told Global News’ Rachel Gilmore there were roughly 5,000 people at the festival grounds for the main concert and events as of noon on Friday.

The daytime ceremony started at 11:30 a.m. Eastern on Friday and it ran until 1 p.m.

The evening show started at 8 p.m. and was scheduled to run until the 10 p.m. fireworks display.

Official Canada Day playlists were also made available on Spotify and YouTube featuring music from the performers.

In his official message to Canadians, Prime Minister Justin Trudeau called on citizens to recommit to the country’s values, including respect, hope and kindness.

Trudeau said the national holiday is an opportunity to commit to the values that the Maple Leaf represents, adding that the flag is more than a symbol.

“No matter what our faith is, where we were born, what colour our skin is, what language we speak or whom we love, we are all equal members of this great country,” he said. “And today we celebrate the place we all call home.”

Is it Canada Day without fireworks? What you should know about its risks

During a speech to crowds gathered at the official ceremony at LeBreton Flats, Trudeau touched on the work of Canadians to continue building the country over the years.

He highlighted the country’s Ukrainian communities as well as national heroes like Terry Fox, whose courage continues to inspire Canadians across the country each year in the Terry Fox Run.

“Canada is about people who are constantly fighting for something, instead of against,” Trudeau said.

“We are standing on the shoulders of everyone who built this country before us, and we work hard every day for those who will follow. All the progress we made didn’t happen by accident, and won’t continue without effort.”

He added: “Canada has never been perfect, and it’s not perfect now. Yes, Canada is one of the best countries in the world, but our work to make it better never stops.”

She said after two years apart, it was a “wonderful” chance to bring Canadians together in person, and applauded the work done over the past two years by healthcare workers.

“There’s so many things to look forward to, so many milestones to celebrate,” she said.

For many though, Canada Day will be a reminder of loss, Simon added. She pointed to Indigenous peoples who grieve the loss of culture and languages, as well as victims of recent natural disasters and those who lost loved ones to COVID-19.

She called on Canadians to “lead with kindness and compassion” in building a more inclusive country.

“I’m proud to call all of you my neighbours,” Simon said.

For Ottawans who lived through the chaos of the convoy earlier in the year, questions about the return of protestors to the core left them feeling “on the lookout” and cautious, said one local resident.

Michael Del Mastro spoke to Global News from Strathcona Park on Friday, where a small group of anti-vaccine protestors gathered earlier in the day.

He said as a resident in one of the communities hit hard during the convoy, he wanted to show them that the majority of Canadians do not agree with them, citing Canada’s high vaccination rates.

“I’m here to show the convoy people the vast majority of Canadians do not agree with their views. They know that Canada is one of the freest countries in the world already and that this whole convoy is pointless,” Del Mastro said, adding he hopes police will prevent another “occupation.”

Both police and officials from the federal and municipal governments describe the demonstration in February as an “occupation” and illegal protest.

Del Mastro added he thinks the shift in location for the celebration will have the effect of preventing confrontations. While counter-protesting, he added he is “on the lookout” and “cautious.”

Another local, Nicholas Fortura, said he believes the efforts taken so far in the Centretown neighbourhood of downtown Ottawa are helping to keep things safe for residents.

Centretown is located directly adjacent to the parliamentary precinct and was among the hardest hit areas of the city during the blockade, with big rigs parked for weeks and blaring horns along the residential streets of the area.

Neighbouring communities like Sandy Hill, the Byward Market and Vanier were also significantly impacted by noise and the conduct of the convoy participants.

“I think the reinforcements are much better at this time than the last time,” Fortura said. “I think things have fizzled. I think that the leaders being locked up or still facing charges, it’s kind of diminished the crowds this time around.”

With the celebrations moved to LeBreton Flats and security measures in place, he added: “It just looks like a regular Canada Day.”

In some community forums such as the r/Ottawa sub-Reddit, some users had suggested they planned to get out of the city and worry about whether police will do enough to prevent another convoy blockade.

Ottawa police warned against any unlawful behaviour, saying in a tweet Thursday any violence or aggression “has no place in our city and will be met with enforcement.”

Four people were arrested Thursday evening following an incident at the National War Memorial. Ottawa police said an officer had been choked after “an interaction with officers became confrontational.”

— With files from The Canadian Press